When you book with an account, you will be able to track your payment status, track the confirmation and you can also rate the tour after you finished the tour.
Sign Up
1011

The Chefchaouen and Morocco Imperial Cities tour is a complete program

You will be able to visit the Morocco imperial cities combined with Chefchaouen, the Blue City of Morocco.

The tour covers the actual Capital Rabat, the ocher city of Marrakech, the Spiritual city of Fez & Meknes. Fez was the capital many times under several dynasties, Idrissid, Marinid, Wattassid? Saadian, Alaouite. All these 3 cities have been also the Capitals in a certain period of the History of the Kingdom. You will have the chance to explore one of the most Instagrammed places in the Kingdom, know as the Blue Pearl or Blue City.

Chefchaouen Morocco is located in the Rif Mountains, it was founded in the 15th century by Abu al-Hassan Ali ibn Moussa ibn Rashid al-Alami. There are theories about why the walls and buildings of Chefchaouen are shades of blue. Some say it was painted blue by the Jews, others say it’s to keep the mosquitos away, while some just said it represents the color of the sea.

The tour covers guided tours of Rabat, Fez, Meknes, Chefchaouen, and Marrakech, you will explore the exotic part of the country, the history, the culture, you will meet with locals and learn their way of living and a lot of beautiful landscapes and beautiful views.

PURE MOROCCO arranges for private English-Speaking local guides on some sites, according to the itinerary, of course, we are also able to arrange a private tour guide in additional spots if required and/or throughout the entire Morocco trip with supplement.

Overnight in : Rabat.
Optional (s) : Fast Track on arrival
As you land in Casablanca, our local driver guide will welcome you in front of gate 2 outside the airport. You will drive up north to Rabat, capital of Morocco; you will be taken to check-in at your hotel where you will be spending the night.

Overnight in : Chefchaouen
Meals : Breakfast, Tea break
Optional (s) : Café Maure Overlooking Abouregrag River
After breakfast at your hotel, join your tour guide for a tour of the capital city of Morocco. Rabat was founded by Abd Al-Mu’min, a ruler of the Almohad dynasty for military reasons. It was built to serve as a fortress, hence its original name Ribatu l-Fath, meaning &quot;stronghold of victory&quot;.  Our guided tour in Rabat will then revolve around uncovering the history of Rabat. The tour includes a visit to the Royal Palace, Chellah, Hassan Tower, and Kasbah Ouddaya. Free time afterwards to stroll around the souks and bazaars in the old medina of Rabat which are full or all type of merchandise as well as leather made traditional and moder shoes alongside Moroccan styles bags with some authentic Berber style and old jewelry shops . Then, Continue to “Café Maure “on the bank of river Bouregrag, to enjoy a Moroccan mint tea alongside some Moroccan goodies like: Kaab Ghazal and Ghariba After the tour you will be taking the road and say good bye Rabat and Hello Chefchaouen.
The more you know: Kaab Ghazal means in Arabic the hoof of the dear, and along with Ghariba and Mint Tea are symbols of Moroccan hospitality

Overnight in : Chefchaouen
Meals : Breakfast
Optional (s) : Tour Guide in Chefchaouen
After breakfast, you are free to soak the narrow streets of Chefchaouen by your own, the most instagramable of Morocco, we recommend you to preparer your camera to take some beautiful photos during your tour, can also visit the Kasbah Ali Ben Rachid Plaza Uta el-Hammam.
Chefchaouen is Morocco’s “Blue Pearl”. It has come to be known as such due to a distinctive blue color all the inhabitant use to paint their houses .This tradition trace back to the Jewish traditions and beliefs that the color blue represents the sky which in turn reminds people of heaven and God. This color covering the city gives it and amazing charm as well as a sense and an atmosphere of relaxation, comfort and peace. Have you heard of healing pearls and gems? Well this one really works.

Meals : Breakfast
After breakfast meet you driver guide to get transferred to Fez. En route, we will be making a MUST stop by Volubilis and Meknes. The archeological site of Volubilis is listed by the UNESCO as a worldwide heritage, and it is a witness of a multi-cultural Morocco. You will walk around the remains of the Roman outpost, through the arcs of Triumphal arches, the the Capitoline Temple and large captivating Orpheus mosaics which tells tales of roman life.
Afterwards, the trip will continue to the Imperial City of Meknes, one of Morocco’s lesser-visited. It was built by Moulay Ismail and was conceived to be the ‘Versailles of Morocco’.  Once you meet your local guide, you’ll be able to visit the famed gate of Bab El Mansour, and Lhri. These sites are the main beating veins of the city. We will then continue our way to Fez.

Overnight in : Fez
Meals : Breakfast
Optional(s) : Lunch – Pottery workshop experience
After breakfast, start your guided city tour of Fez, once the capital of the kingdom before 1912. Your visit today will revolve around exploring Fez the Medina which is a World Heritage Site, according to the UNESCO, and it was founded in the 9th century and it is home to the world&#39;s oldest university.
Your local guide will show you around the major sites like Bou-Inania and AttarinMedersa, the tanners, Ess- Seffarine Square, MoulayDriss tomb, El-Nejjarine square, and the cabinet makers’ souk, the Hebrew district ‘Mellah’. In your schedule, you will have a pottery workshop (optional) with a pottery master so that you get to have a full Moroccan experience. After lunch (optional) at a local restaurant, you are free to either choose to go back to your hotel or stroll in the narrow alley of the old town on your own.

Overnight in : Marrakech
Meals : Breakfast
After breakfast, you will be picked up, and then travel to the imperial city of Marrakech. Along the way, you will pass through small villages such as Imouzar and Ifrane. A bit later in the day, when you reach one of morocco’s best known agricultural centers called Beni Melal. You will continue on your journey to Marrakech. On arrival in Marrakech, you will be taken to check-in at your hotel where you will be spending the night.

Overnight in : Marrakech.
Meals : Breakfast,
Optional (s) : Kotchi Experience (Horse Carriage Tour) – Lunch
Today you will get the chance to wake up and live Marrakech, a dream of many, so be sure to make the best of it. After your breakfast our local guide and driver guide will be waiting for you to start guided city tour of the “Ochre City”. We will visit first in the morning the Majorelle Garden which was named after the French painter, Jacques Majorelle who dedicated a lot of effort and passion to this art piece. After Majorelle let’s continue after it to Menara and though the name in Arabic translates to “lighthouse”, it is actually a pavilion with a basin and a garden of orchards and olive groves. We will be heading afterwards to the Koutobia Mosque and through the Jewish quarter called Mallah, visit the Bahia Palace, before to finish your visit with a carriage ride or “Koutchi” to Jamaa El Fnaa. (Optional)

Overnight in : Marrakech
Meals : Breakfast
After Breakfast at your hotel, enjoy a free day to discover Marrakech on your pace. Have your own Marrakech experience, meet the locals, engage in the “Marrakechi” life style, find the story tellers, the snake charmers and let Marrakech charm you as well.

Meals : breakfast
Optional (s) : Fast Track on departure
Wake up and enjoy a lovely breakfast at your hotel before heading to Casablanca to catch a flight back home. 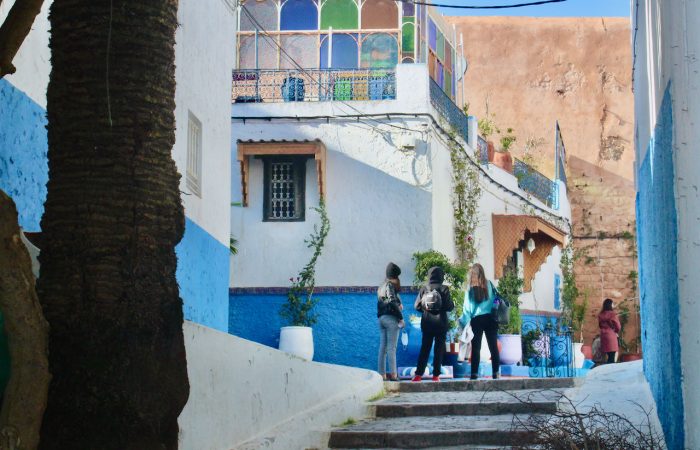